Wales Rally GB had been the target for this year with the events at the Woodpecker and the Trackrod to make sure the car and the crew were ready to tackle an event of this size.  This had been a long term aim of the team having grown up watching rally GB long before we bought the first rally car. The chance to finally compete was too good to pass up. Unfortunately the budget wouldn’t quite stretch to the full international event but the 2 day national event was still something to really look forward to.

The full team were back together for this event with Sam taking the opportunity to have a holiday (!!) and helping out with the servicing.

In true ABC Rallying fashion things weren’t going too smoothly in the lead up to the event. The gearbox had been rebuilt since the Trackrod and some damage was discovered on the pinion on the output shaft.  A new shaft was required which delayed the rebuild and it was the Wednesday before the event before the box was back in the car. Unfortunately there was a small problem preventing 1st, 2nd and reverse from being selected. The gear cluster had to come back out and the selectors were reset which seemed to fix the problem.

This delayed the first road test until Thursday and the handling wasn’t perfect once the car was out on the road. Some more work to change the suspension geometry and get the car handling properly.

Another late night for Mr Black meaning his holiday wasn’t very relaxing but the car was almost ready and a few hours work in the morning and it was finished off and loaded onto the trailer.

Sam and Brian took the car straight to Deeside for scrutineering and David, Gordon and Ian made a quick stop at Demon Tweeks in Wrexham for a new crash helmet. The team were the last crew to present the car for scrutineering but it passed with no issues and we were set for the start.

Although we weren’t doing any competitive mileage until Saturday we had to take the car to Chester to take it over the ceremonial start ramp. 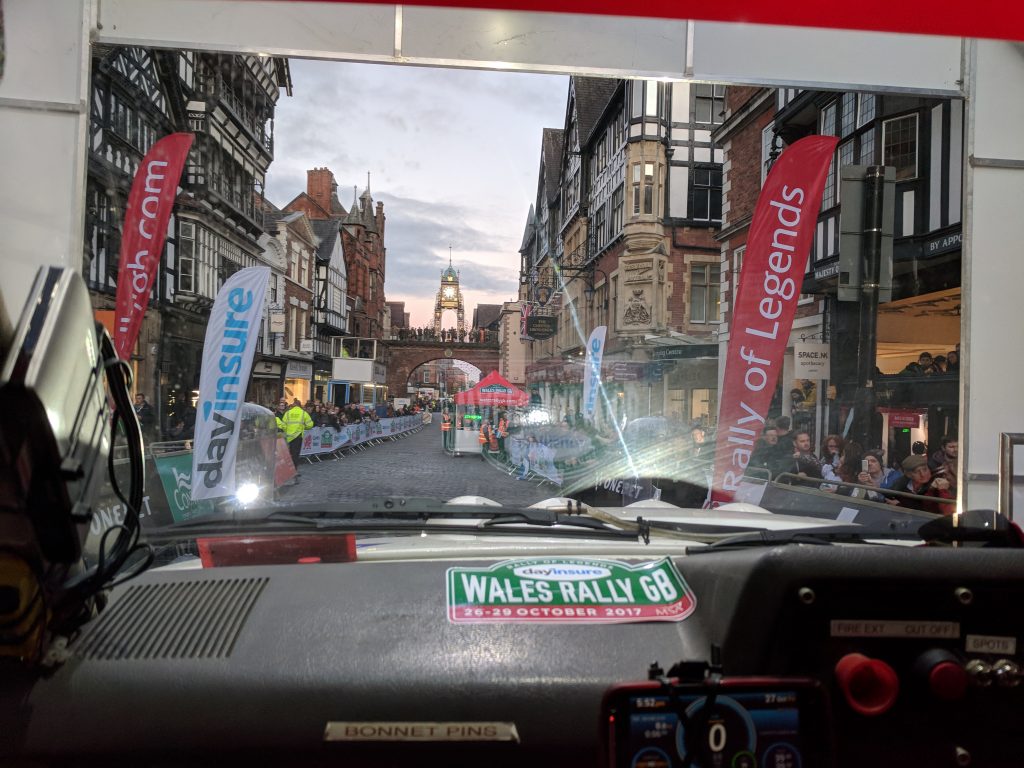 The atmosphere was fantastic with the streets full of spectators and the excitement really starting to build for the weekend ahead.

The rest of Friday night was spent in the service area at Deeside which was the site of the Rally Village. It was fascinating to see how the professionals go rallying.

Finally Saturday morning came and we started the event proper.  The first stage was a quick blast around Cholmondeley Castle, a short spectator special.  We took no chances in here and were ultra cautious still setting a respectable 35th overall.

Onto the first gravel stage at Aberhirnant. It was fairly slippy but the car and driver were going well.  We caught a car in the stage who got out of the way very quickly and caught another car just as we got to the finish line. No real moments and everything went very smoothly.

A clip from Aberhirnant (start at 12:25 if the clip doesn’t start there automatically) – uploaded by Daniel Austen to YouTube.

The next stage was Dyfnant and we had a great run through here. The car was very well balanced and was handling beautifully.  About 3 miles from the end the handling went funny and there were some bad noises under braking.  Gordon suspected a puncture and we continued to the end and then examined the damage.  Unfortunately it wasn’t a puncture but some sort of suspension problem as the front wheels were pointing in quite different directions.

We headed down the road section to get to the refueling point and then stopped in a layby to get a better look at the damage.  Unfortunately the problem was terminal and the mount holding the tie bar had sheared off completely.  We made some repairs to allow us to drive it back to Deeside but it wouldn’t have been safe to continue on the stages. 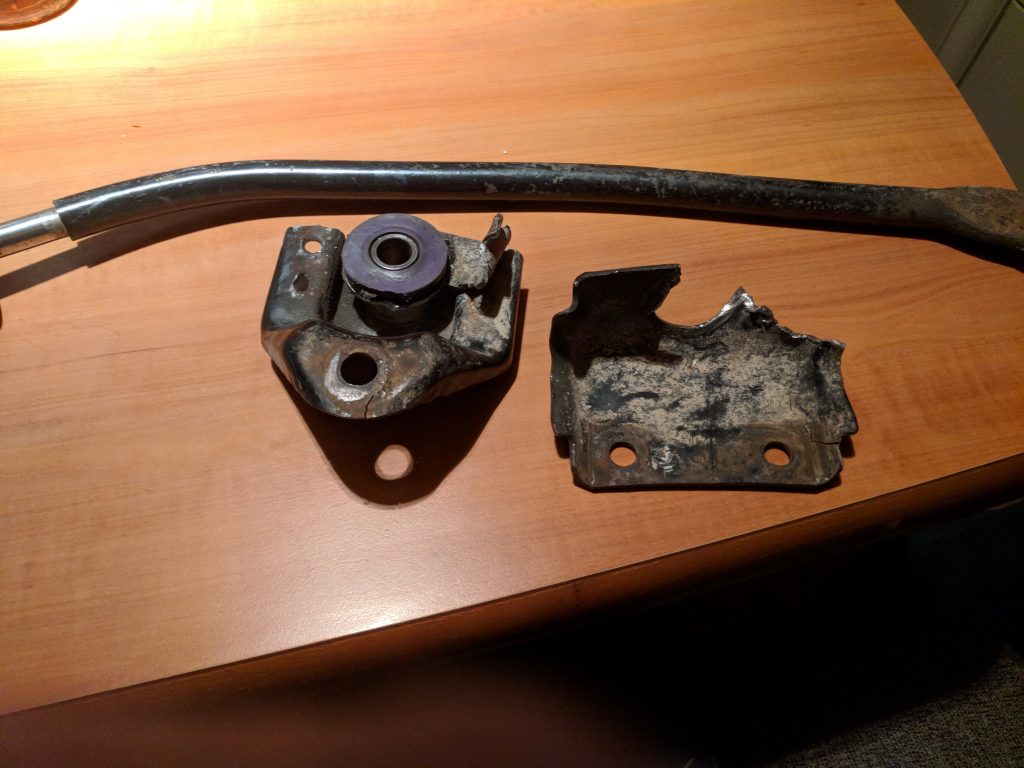 Sam and Simon met us at Deeside and got to work replacing the broken part.  They were soon joined by Brian and David and we got it completed and the car re-scrutineered allowing us to re-start on Sunday morning.

Saturday evening was spent watching the WRC cars booking in to the time control after they had completed the night stages.

Sunday was a fairly short day with 3 short stages to complete the rally.  We were running under rally 2 rules meaning we were carrying some time penalties for missing 2 stages on the previous day.  This had dropped us down the order but wouldn’t stop us having fun and enjoying the day.

The first Sunday stage was Gwydir. Sitting at the start Gordon recalled that he had done the stage before in the 2016 Cambrian rally.  He had overshot a junction and ended up down a fire break in the forest.  About halfway through the stage we hit a sudden square right and overshot slightly having a slight spin and stalling the car. At the end Gordon announced that it was the same corner he had overshot last year.  Everything else went well and although a few seconds were lost it was still a good time.

The next stage was Alwyn. The stage went perfectly and was our best time of the weekend setting 19th quickest time.

We then had a short regroup and onto the final stage Brenig. This again went very well right until the last corner. Gordon misheard a note and missed a tight right hander meaning we ran up a banking and stalled. There were a few tense moments as we wondered if there was any damage but we quickly got going and across the finish line.

We then had the last road section back to the ceremonial finish in Llandudno. Again there was a great atmosphere with lots of spectators out to see the rally cars completing the rally. 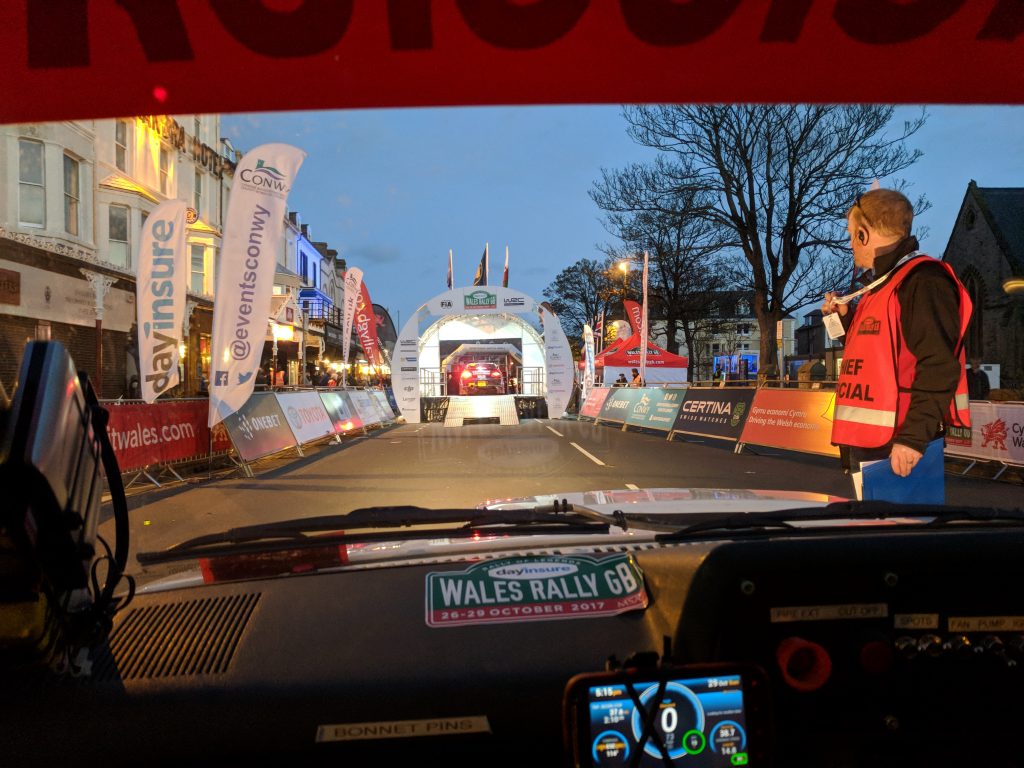 We got to the end even although we had to use rally 2 to get there but it was still great to get to the end.  The overall result wasn’t spectacular due to missing the 2 stages but the car showed real potential and could have been top 25 if we had had a clean run on the 2 stages we missed. That’s rallying and overall it was a really enjoyable event with great stages and just being part of an event of this stature was an amazing experience.  The stages were really busy with spectators and it was great to see so many saltires out on display.

Huge thanks to everyone who helped us get there.  In particular to Sam Black for spending so much time on the spanners when he was meant to be on holiday.  Thanks also to Brian, David and Simon for their assistance over the weekend keeping the car going.