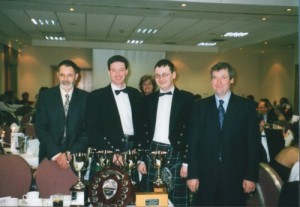 Thanks to Donna Alexander for the photo.

Gordon is a farm manager who started rallying in 1999 after an interest in the sport for the previous 10 years. 1999 was Gordon’s first time at competing in motorsport although he has now tried rallying (driving and co-driving), sprinting, autotests and grasstests. Gordon also marshalls at rallies when time permits.

Ian is a software engineer who started rallying at the same time as Gordon having also followed the sport for years previously. Since starting in 1999 Ian has tried driving on a rally, some sprinting and a bit of autotesting. Ian is also responsible for the team website.

Sam is an hydraulics engineer who has a love of all things mechanical. Sam has helped Gordon with the servicing and maintenance of his road cars for years so when we asked if he would like to join us with the rally car project he was more than happy to do so. As well as servicing the rally car, Sam also does a bit of sprinting and grass testing and has competed on a few Rally Time Trial events held at Kames.

Brian is Gordon’s brother and he helps Sam with the servicing duties on all of the events.

David is Gordon’s eldest son and also helps with the car preparation and servicing duties.  David has also co-driven for his dad and plans to sit in the passenger seat in the future as well.