Here is a history of the various cars that the team have run over the years.

The first car was a green Nova bought in 1999. Gordon and Ian travelled to Peterborough to collect the car and it was used by the team in 1999 and 2000 before being sold on to allow us to buy the upgraded white Nova.

The car was fairly basic with a 1300 8v Vauxhall engine.  It was a great place to learn and the car ran well for the year we had it.

It was running the Suzuki Swift GTI 1300 engine with a Quaife competition Vauxhall gearbox.  In this specification the car was incredibly reliable which definitely contributed to the championship success.  In fact the car only failed to finish a single event which was the Jim Clark Rally in 2003 due to an accident in which the car rolled.

The car was sold to a motorsport dealer who stripped the car and sold the parts.  We then bought back the shell and rebuilt it with a Vauxhall 1600 8v engine and gradually upgraded it over time.  The car is still with the team but is due for a re-shell which has been planned for a few years but there are still no signs of it getting completed.

We had a Mk2 for a short period of time at the end of 2002. The main purpose was to compete in the Tour of Mull at the end of the year.

The car was very basic and quite underpowered with a 1300 crossflow engine and leaf springs at the back. However it was good fun to drive and server the purpose we bought it for.

If we had known then that the price of Mk2 escorts was about to rise so drastically we would probably have kept hold of it but hindsight is a wonderful thing and we sold it on recouping the money we had spent buying it and bringing it up to current safety standards.

the car was bought in late 2003 and its last outing for the team was in 2009. This was one of the very first Evos imported into the country and it started life with us having a standard Evo 1 engine and gearbox.  Some upgrades were added over time and it got an engine upgrade to run with GEMS engine management and a dog box was added later.

The best results in this car were finishing 8th overall in the Scottish Rally and winning the Kames trophy outright both in 2006.

Sadly it was a very expensive car to keep running and we let it go in 2009 and went back to competing in the Nova.

Gordon bought an MG ZR as a cheap car to go out and do some rallies.  It was fairly standard and wasn’t as quick as the Nova but did handle pretty well due to it being a bit wider and being well balanced.  In 2016 Gordon competed on the BTRDA championship and picked up a good few class awards throughout the year. 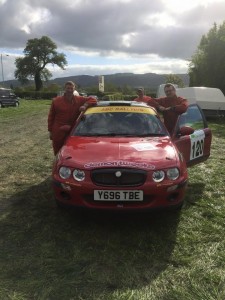 Gordon bought another Nova in 2017.  The plan was to compete on Wales Rally GB and then use it for competing in a few events each year.

The engine is a 1600 16v Vauxhall engine with the Quaife competition gearbox. 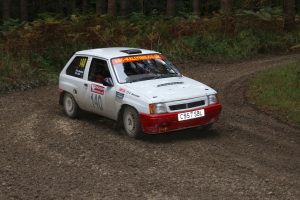